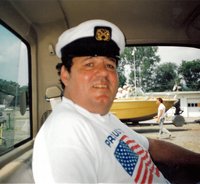 Hugo was a lifelong resident and a graduate of Poughkeepsie High School.

He was a Electrician for IBEW 363 and was the Co-Owner of the Amber Lantern. Hugo also served in the United States Army in the 854 Division.

Hugo was also Past Commander of the John Livingstone American Legion Post 1466 and a Volunteer with the Fairview Fire Company.

Hugo loved to go camping and being outdoors.

Funeral Services will be held at a later date and Burial will be private and at the convenience of the family.

The family ask's that Memorial Donations in Hugo's name can be made to Hudson Valley Hospice 374 Violet Ave. Poughkeepsie, New York 12601.