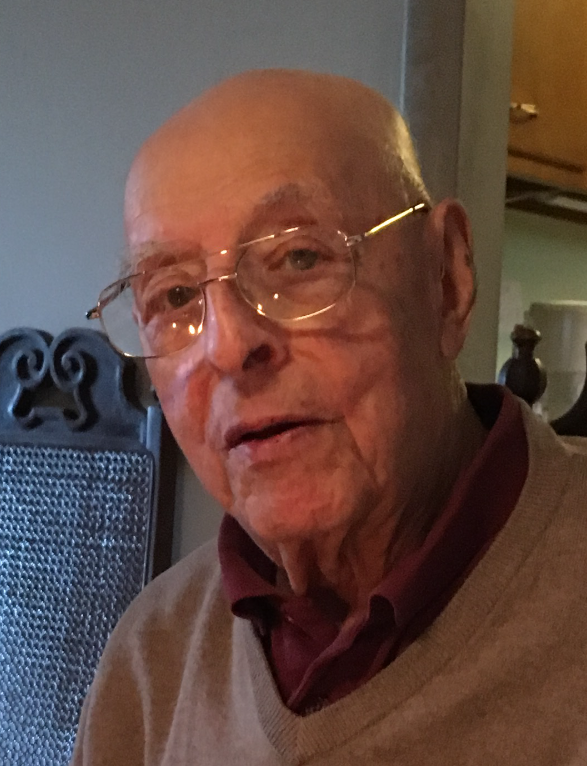 It is with great sadness that we announce the passing of our beloved father Michael M. Haddad on January 26, 2021, at the age of 95. He was a longtime Poughkeepsie resident, having retired from IBM in 1987 after over thirty years. Michael was born in Worcester, MA on March 26, 1925, the son of the late George J. and Sadie (Scaff) Haddad. One of seven children, he attended North High School, and in 1943 joined the United States Navy during WWII, honorably serving in the Asiatic Pacific. Upon returning home, Michael co-founded and operated Haddad’s Shoes with two of his brothers. He went on to receive a Bachelor’s degree from Marietta College in Ohio and then attended graduate school studying chemical engineering, which was his profession. On October 3, 1955, Michael married Janet M. Scanlon in Worcester, enjoying 59 years of marriage before her passing in 2014. In 1957 they came to Poughkeepsie where they raised their family. He is survived by his daughters Lorraine and Michele, his grandchildren Stephanie and Gregory, and their respective families. Michael was a loving, kind, and supportive family man who relished family activities--particularly at the IBM Country Club--and travel. Many memorable trips in the Northeast and Canada during his child raising years were followed by decades of happy family reunions on Cape Cod and the coast of Maine. In their golden years, he and Janet toured abroad, visited local parks along the scenic Hudson River, and cherished special times with their beloved grandchildren. Michael was an avid sports fan, having a special place in his heart for the New York Yankees. His passion, though, was golf: he carried a three handicap during his working years and played regularly until the age of 90. More recently, he enjoyed the camaraderie of playing cards with his friends at the Town of Poughkeepsie Senior Center. A Graveside Service will be held in the late Spring at Rural Cemetery, 180 Grove Street, Worcester MA 01605. Memorial donations may be made to the Walkway Over the Hudson in memory of Michael M Haddad (online at walkway.org/donate or by mail: Walkway Over the Hudson, P.O. Box 889, Poughkeepsie, NY 12602). Funeral services and burial are private and will be at a later date. Funeral arrangements are being handled by the Timothy P. Doyle Funeral Home 371 Hooker Ave. Poughkeepsie, New York 12603. If you would like to leave an online condolence please visit our website at www.doylefuneralhome.com