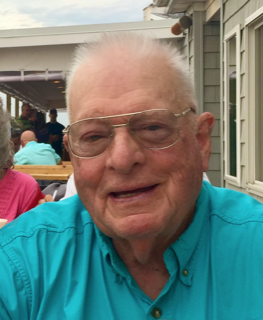 William L. Kirchner Jr., 88, died peacefully at home early morning March 3rd, 2021 with his family surrounding him. Born on October 2nd, 1932 in the city of Poughkeepsie, NY to Helen E. Kirchner and William Louis Kirchner Sr., William grew up with his two siblings, Jack J. Kirchner and Roger B. Kirchner. William started his schooling in the Poughkeepsie school system but transferred to Arlington when his family moved to the town of Poughkeepsie (Macdonnell Heights). William was known by the nickname "Junie" until the move; Those who knew and loved him after the move affectionately called him "Bill". Bill is pre-deceased by his parents and siblings.

Bill went to culinary school in Bayonne, New Jersey while training in bootcamp for his military service. He served in the Navy from ‘52-’56 during the Korean war as a baker, cook, issue room crew member, and butcher. Bill's first tour in the Navy took him to Beirut, Lebanon. The trip took 19 days, and Bill was seasick for the entire journey. When they finally arrived at port, Bill had lost about 40 pounds and his clothes were hanging off of him! He walked on land, returned to the ship, and was never seasick again during his service. Bill served on the USS Roanoke (CL-145) for many years, which was stationed largely in the Mediterranean.

After being honorably discharged from duty in ‘56, Bill established his first butcher shop in Red Oaks Mills where he worked for many years. After selling his first business he came to Pleasant Valley where he worked in the Valley Market with Henry Butts. Henry and Bill took over the Valley Market, and thrived for many years until they both retired. Many will remember that Bill always gave children who visited his store an extra piece of bologna, and greeted all women no matter their age with a friendly "hello young lady"!

Bill married his first wife Pat and had three children: Christine, Mark, and Gretchen Kirchner. Pat and Bill parted ways, and he married his second wife Marilyn in 1980 and inherited a fourth child: Janet Arms. He has six grandchildren: Jennifer Kirchner, Michael Kirchner, Jessica Kirchner, Bryan Bernard, Patrick Gallo, and Jesse Goldberg, and two great grandchildren: Corbin Magruder & Skyler Disotell. He is survived by Marilyn, all of his children, grandchildren, and great-grandchildren.

Bill's favorite hobbies included golf, fishing, playing jazz piano, and traveling with his wife Marilyn. An avid golfer since '57, Bill traveled to Myrtle Beach every year for 22 years. He won two hole-in-one trophies, and could be found on the greens any time the weather was good enough. A self-taught jazz pianist, Bill played by ear and loved to improvise at the keyboard, and serenaded his family every Christmas with jazz renditions of Christmas tunes and carols. He had begun to teach his great-grandson Skyler to sit at the piano with him and play. Bill started fishing in ‘75, and his favorite fishing haunt was the Esopus river in Boiceville.

He will be missed.

In lieu of flowers the family respectfully requests memorial donations to St. Paul’s Church:  PO Box 1449  Pleasant Valley, NY 12569. There will be a Memorial service at St. Paul’s later this year.