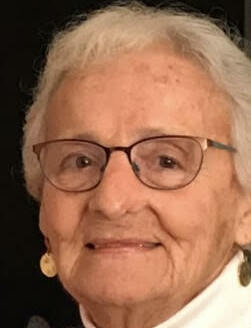 Please share a memory of Joan to include in a keepsake book for family and friends.
View Tribute Book

She was born on December 10, 1932, in Middleport, Pennsylvania, the daughter of the late Edward and the late Helen (nee Rolenitis) Valent.

On June 29, 1952, at Holy Trinity Church in Poughkeepsie, Joan married Charles F. Whiteley.  Joan was a local resident for over 70 years.

Joan was a Secretary for the English Department at Arlington High School, retiring in 2008.  Joan was also a Ho Jo Girl, working at Howard Johnson’s in the 1960s.  Joan was a past President of the St. Francis Mothers’ Club, and was a member of the “Girls’ Birthday Club”.  Joan was a member of Holy Trinity Church in Poughkeepsie for over 60 years.  She loved to golf and bowl.

Survivors include her children and their spouses, Debbie and Larry Scardaci of Hyde Park; Tom and Nancy Whiteley of Maryland; Patrick and Laurie Whiteley of Pleasant Valley; James and Karen Whiteley of New Jersey; and Tim and Susan Whiteley of Hyde Park; grandchildren, Mike, Chris, Charlie, Samantha, Nicole, Daniel, Brian, Jay, Maxine, Zachary, and Josie; and, her great grandchildren, Madyn, Gabe, Silvia, Lia, Jake, Gracie, Connor, Gus, Bradley, Mikayla, and Callie, along with many nieces and nephews.  Joan was predeceased by her brothers, Larry and Carl Valent.

Joan’s Burial will be at Calvary Cemetery, LaGrange Avenue, Poughkeepsie.

To send flowers to the family or plant a tree in memory of Joan Whiteley, please visit Tribute Store
Wednesday
20
April