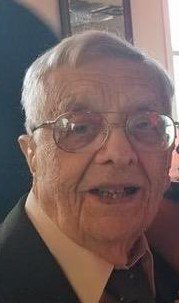 Obituary of Michael A. Caso Sr.

Michael has been a resident of Poughkeepsie since 1971, when he relocated from Staten Island, NY. Michael served his Country in the United States Army during WWII.

He attended City College’s School of Accounting and Civic Administration.  He began his career in accounting in 1948 at Bebry Bedding, rising to Treasurer.  In 1967, he joined Great Eastern Publishing in Poughkeepsie as an Accountant and Manager, retiring after 30 years.  After retirement, he and his wife enjoyed traveling throughout the United States and Europe.  He was a volunteer for Meals on Wheels and Vassar Hospital Thrift Store.  He was a member of St. Martin dePorres Church, a long-time parishioner of Holy Trinity, and a life member of the Italian Center.

He loved spending time working in his yard and making it beautiful. He liked to read, was an accomplished pianist, loved music, enjoyed sports and loved attending games, and could always be found watching one of his favorite teams: the football and baseball NY Giants, Mets or Rangers. His greatest joys were the frequent family gatherings and holidays spent with his beloved wife of 71 years and his large extended family, full of laughter, Italian food and wine.  He could brighten anyone’s day with his wonderful sense of humor, infamous practical jokes and spirit of generosity.  He always had a smile for everyone and there wasn’t a person to whom he didn’t say hello.  Michael’s passion for life, thoughtfulness, selflessness, supportive nature, strong morals and character will be greatly missed by his family and friends.

Due to the current health crisis, services and burial at Poughkeepsie Rural Cemetery will be private. A memorial service will be planned at a later date.  In lieu of flowers, memorial donations may be made to Hudson Valley Hospice (hvhospice.org/donate-memorial/) or VA Hudson Valley HCS (Voluntary Services, 41, Castle Point Rd, Wappingers Falls, NY 12590 or hudsonvalley.va.gov/giving).

Funeral Services are being handled by the Timothy P. Doyle Funeral Home, 371 Hooker Ave. Poughkeepsie, New York 12603. If you would like to send an online condolence please visit our website