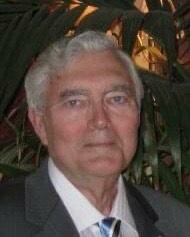 Please share a memory of Joseph to include in a keepsake book for family and friends.
View Tribute Book

Joseph G. Francesconi, age 90, of Poughkeepsie passed away peacefully on September 23, 2021 at Vassar Brothers Hospital. Joseph was born in New York City to Francis and Marie Francesconi and graduated from Stuyvesant High School. He was also a graduate of New York University with a BS in electrical engineering. He served in the United States Army as a 1st Lieutenant from 1953 through 1955 during the Korean War. After his time in the Army, he began working for IBM Corporation at which he went on to have a very successful engineering career that spanned decades. He loved to tell stories of the early technology that his teams deployed for the airlines, and was most proud of his later teams development of IBM’s first high speed graphics computers. Joseph loved to travel and traveled throughout the world with his late wife, Doris. He also was a gourmet cook and loved to prepare holiday meals for his family.Joseph was dearly loved by his family. He was a great husband and father and will be missed tremendously. He is predeceased by his wife Doris. He is survived by his daughter Karen Bracy of Falmouth, Maine, Christine MacFarland of Gloucester, Massachusetts, Cynthia Grieco of Poughkeepsie, NY and son-in-law Tom Grieco of Poughkeepsie. He also has four grandchildren: Hillary Lawrence, Conner Bracy, Adam MacFarland, and Nicholas MacFarland.A viewing is planned for 4pm until 6pm, Tuesday, September 28, 2021 at Timothy Doyle Funeral Home, 371 Hooker Avenue, Poughkeepsie, NY. Funeral services will be held at Poughkeepsie Rural Cemetary at 1pm on Wednesday, September 29, 2021. Memorial Donations can be made in Joseph's name to St Jude's Children's Hospital Memphis Tenn.

To send flowers to the family or plant a tree in memory of Joseph Francesconi, please visit Tribute Store
Tuesday
28
September