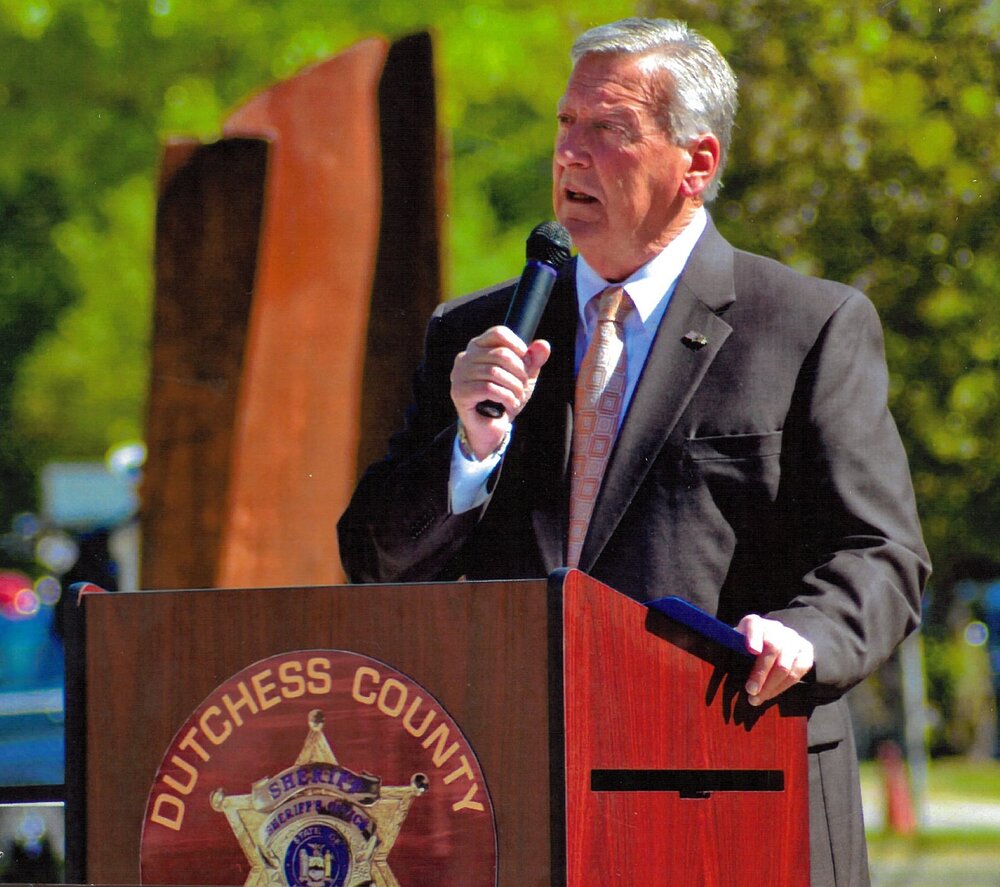 Please share a memory of Sheriff Adrian to include in a keepsake book for family and friends.
View Tribute Book

Sheriff Adrian “Butch” Anderson was born and raised in Pawling, NY the son of Adrian and Jeanette Bierce Anderson. He graduated from Pawling High School in 1966, after which he attended Ulster Community College in New York and Chapman College in California, where he majored in Physical Education. During his high school and college careers Sheriff Anderson excelled in basketball, football, and baseball and has been inducted into the schools’ Halls of Fames for all three sports.

Anderson is an active member of many organizations which include the Poughkeepsie Elks BPOE Lodge No. 275, Fraternal Order of Police, Dutchess Community College Foundation Board, FBI National Academy Association, YMCA Board of Directors, the Harlem Valley Golf Club and the Pawling Fire Department. He is a board member of the Make a Wish Foundation of the Hudson Valley and serves as chairman of numerous organizations such as the American Heart Association, The March of Dimes, and Big Brothers and Big Sisters. Sheriff Anderson is a founding board member of The McElroy Children’s Cancer Foundation and is extremely active with the foundation. Sheriff Anderson has also joined with actor and long time friend Mr. James Earl Jones in raising funds for several of the Pawling YMCA’s major projects. In addition, Sheriff Anderson has always been committed to civic and community groups, evidenced by his numerous awards and accomplishments throughout the years.

Sheriff Anderson began his law enforcement career in 1970 when he was appointed as a Deputy Sheriff with the Dutchess County Sheriff”s Office. After spending time in the Uniform Patrol Division he was promoted to Detective in 1974 and made part of the Major Case Squad, where his abilities and persistence brought several major investigations to successful conclusions. Sheriff Anderson has an extensive resume in both professional training and in police instruction, highlighted in 1977 by his graduation from the 110th session of the FBI National Academy in Quantico, Virginia. During his lengthy law enforcement career Sheriff Anderson has been awarded numerous citations for in the line of duty accomplishments, including five Combat Crosses and numerous apprehension awards. He was appointed Undersheriff in 1993 and was responsible for overseeing the daily operations of the entire Sheriff”s Office. First elected Sheriff of Dutchess County in 1999, Sheriff Anderson successfully completed his first four-year term of office and won re-election as Sheriff in 2003, 2007, 2011, and 2016. The start of Sheriff Anderson’s 4th four-year term in January 2012 was highlighted by him being sworn in by long time friend and actor James Earl Jones, as well as the attendance of several dignitaries including US Senator Charles Schumer and US Representative Nan Hayworth. After an impeccable 47 years of service Sheriff Anderson continues to serve as the 72nd Sheriff of the Dutchess County Sheriff’s Office, which was formed in 1717 and today includes 500 employees who provide comprehensive police services to a population of 290,000 over 816 square miles.

Sheriff Anderson is survived by his wife Danielle and their three children Beau Anderson, Poppy Anderson and Olivia Marxer, his grown son Jacob Anderson of Pawling, his sister Fayne Lappas of Rochester, his brother In-law Robert Tabolt of Pawling and several nieces and nephews.

Sheriff Anderson was predeceased by his parents and his sister Janice Tabolt and brother in-law John Lappas.

Funeral Services for Sheriff Anderson will be held 10am Wednesday October 6, 2021, at the Majed J. Nesheiwat Convention Center 14 Civic Center Plaza Poughkeepsie, New York 12601. Burial will be private in the Family Plot.

In Lieu of Flowers the family asks that memorial donations be made to the Sheriff Adrian Anderson Memorial Fund 10 West Street Pawling New York 12564.