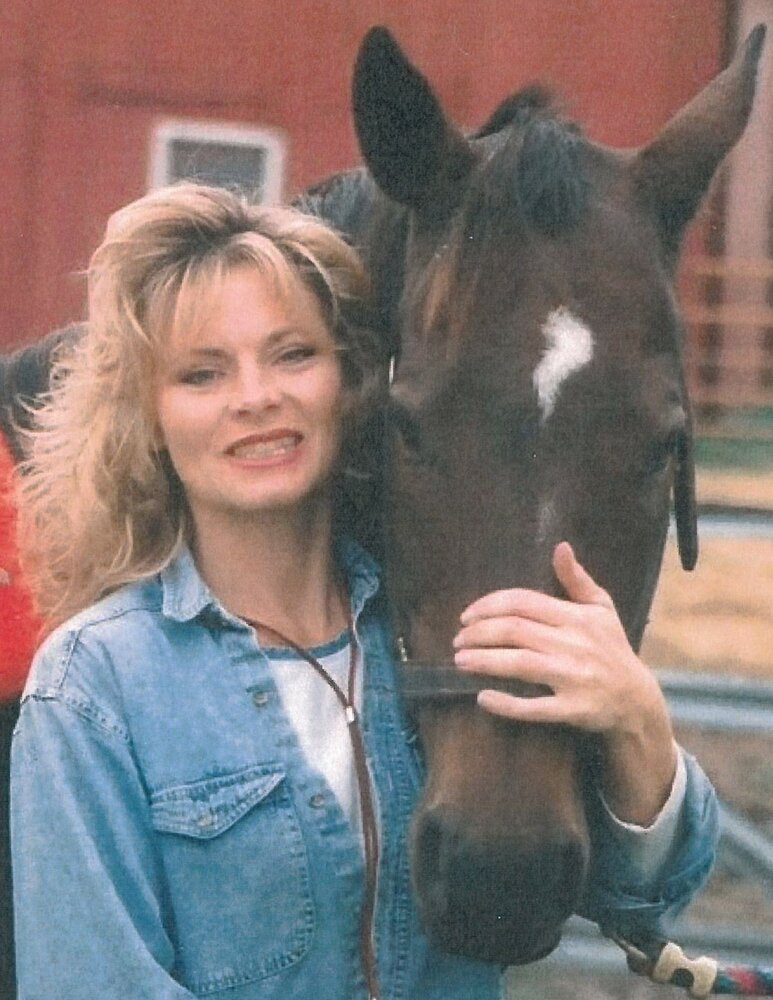 Please share a memory of Kathleen to include in a keepsake book for family and friends.
View Tribute Book

Kathleen Sinon Anduze of Poughkeepsie, NY died peacefully at her family farm on November 21, 2021 surrounded by her husband, children and siblings. Her death follows nearly a decade of suffering from a progressive neurodegenerative illness. She was 62. Kathleen was born on November 11, 1959 to Stewart “Stu” Sinon and Joan Decker Sinon.

As a young child, she lived on School Street in Poughkeepsie before Stu and Joan established the family homestead, Sinon Farm, in 1968. Growing up on the farm, which boarded over seventy horses at its peak, fostered a hard-nosed work ethic that Kathleen carried with her throughout her life, as she described in the obituary she wrote for her father in 2007: “Respect for parents, hard work, appreciation and compassion were the walk that we walked.” Through leadership roles in 4-H, participating in horse shows and eventing, and starting a business for horse riding lessons and pony rides, Kathleen is remembered as an accomplished and highly skilled equestrian. “Kathleen taught me how to ride” is a common refrain our family repeatedly hears from those expressing their condolences. Throughout her twenties and early thirties, Kathleen traveled and lived around the country with her first two children, Katie and Patrick “PJ” Butler. During that time, she worked wide-ranging and often eclectic jobs, such as a bank teller in Crested Butte, Colorado and the sole owner and operator of a hot-dog stand in Altamonte Springs, Florida.

In May of 1997, she was married to David Anduze, the love of her life and her primary caregiver throughout her illness, with whom she had her third and final child, Daniel. During their engagement, she returned to school to become a registered nurse and worked in the field for over twenty years. Her career spanned positions at St. Francis Hospital, Hudson Valley Hospice, and eventually DRA Imaging, where she was the nursing director of multiple sites. In her personal life, Kathleen was an avid reader and lover of music, and particularly adored the singer songwriters of the late sixties and early seventies, such as Simon & Garfunkel and John Denver. Her primary artistic passion, however, was painting, which occupied much of her free time. The pastoral setting of her childhood surely influenced her artwork, which often featured impressionistic landscapes of Hudson Valley farms and fields, in the medium of acrylic or oil, as well as en plein air paintings of the Hudson River. One of her more popular projects involved paintings on small rectangular barn-slates hung from twine, which were commissioned by and personalized for many families in the community. Above all else, however, Kathleen was a mother who emptied herself out in love and personal sacrifice for her family. As a deeply spiritual woman, who came into the Catholic faith organically in her adulthood, she expressed the charity and love of Christ through her relationships with others. Even throughout the illness which rendered her homebound and eventually entirely bedbound, she was concerned not with herself but the wellbeing of her children and grandchildren. Kathleen was predeceased by her father Stu Sinon.

She is survived by her mother Joan Decker Sinon; her husband David Anduze; her daughter Katie and her spouse Sharon, and their son Julian; her son Patrick "PJ" Butler and his wife Regina Butler, and their three children, Madelyn, Emilie, and Olivia; her son Daniel Anduze; her brother G. Michael Sinon and his wife Angela Sinon; her brother James Sinon; her sister Colleen Sinon Greco and her husband Raymond Greco; as well as many nieces, nephews, and cousins.

Calling hours will be held on Friday, November 26, 2021 from 4 p.m. to 8 p.m. at Timothy P. Doyle Funeral Home, Inc., 371 Hooker Avenue, Poughkeepsie. A Mass of Christian Burial will be celebrated at 10 a.m. at Our Lady of the Rosary Chapel, 185 Hudson View Drive, Poughkeepsie with burial to follow at St. Peter’s Cemetery. In lieu of flowers, donations may be made to Hudson Valley Hospice. To send an online condolence, please visit our website at www.doylefuneralhome.com

To send flowers to the family or plant a tree in memory of Kathleen Anduze, please visit Tribute Store
Friday
26
November