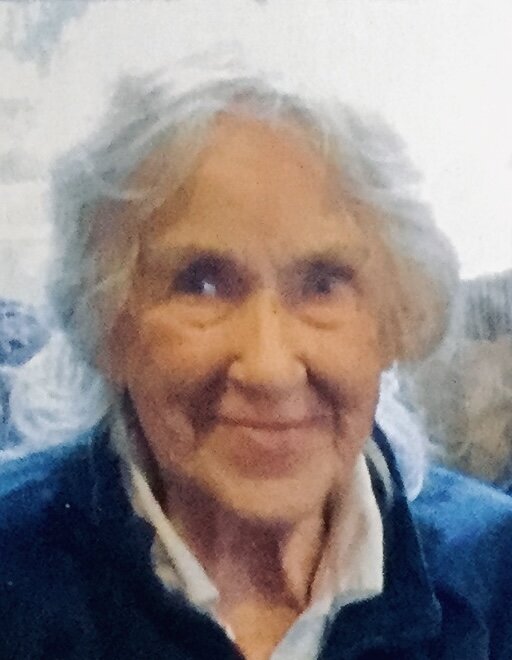 Please share a memory of Mollie to include in a keepsake book for family and friends.
View Tribute Book

Mollie Pitts Birmingham, with her Kitty snuggled next to her, passed away on February 26, 2022, a year after suffering a stroke, and just 11 days before her 99th birthday.

Born in Exeter, Devon, England on March 9, 1923 to Arthur and Leticia (Gladys) Pitts, Mollie enjoyed a happy childhood in Exeter with her parents and her beloved sister, Joan.

During World War II, Mollie volunteered to serve in the English Women’s Land Army and Timber Corps.  It was during that time, she met her husband, William (Bill) Birmingham, an American serving in the 8th Army Air Force in Thetford, England.  They were married on February 22, 1944 in Exeter.

We can only imagine the determination and fortitude it took for Mollie, just 22, to leave the country and family that she loved to start her new life in America.  Following the war, she and their young son, Michael, joined thousands of other war brides and their children on the voyage to America.  She was welcomed and embraced by Bill’s large Irish family.  Together they raised five children, Michael (Diane Amyot) Birmingham, Kinderhook, NY, Sally (Lava) Thimmayya, Laramie, Wyoming, Elizabeth (Mark) Villanti, Poughkeepsie, NY, Jane (Glen Vining) Birmingham, Kingston, NY, and Jennifer (Kevin) Quattrone, Randolph, NY.  Sadly, her youngest daughter, Jennifer, predeceased Mollie in August. Bill, her husband of 57 years, died in 2001.

Mollie was always independent in thought and unique in many ways.  She had an unforgettable sense of style, reflected in her gardens and her home.  She never wavered in her love for England, and visited there throughout her life.  Mollie’s last visit to England was in 2010, at the age of 87, to visit her sister Joan.

Mollie had a great love for dogs, and over the years many dogs found their home on the farm, taking long walks with Mollie in the fields.  Three of her favorites were Max, Mugsie, and Pup.  Mollie was an avid reader and she appreciated art.  She enjoyed lifelong friendships including her Land Army friend, Rosina, and her beloved cousin, Aylmer, and his wife, Pat.  Mollie’s charisma and love of conversation resulted in many visitors stopping by for a chat over tea.

Mollie was well loved by her eleven grandchildren: Tami and Todd, Amanda and Ned, Ben and Olivia, Rachel and Mollie, Katie, Erin and Nick.

Mollie also had twelve great grandchildren:  Patrick and Michael, Kathleen, Natalie, and Evan, Quill and Juniper, Lalo, Cosmo, and Alex and Elizabeth.  Mollie was predeceased by her great grand-daughter, Mattie Ann.  She is survived by her sister’s three children in England, Judith, Richard and Pippa, and by her former daughter-in-law, Marilyn.

Mollie continued to live on their family farm in Kill Buck, NY after Bill’s death, before moving to the Hudson Valley.  She lived for eight years in North Chatham, NY, and then two years at The Fountains, Millbrook, NY.  Most recently, Mollie resided at The Manor at Woodside in Poughkeepsie, NY.  Mollie’s family are extremely appreciative of the loving care that she received from her aides, especially Gladys, Francesca, Sabrina, Betty, Silvia, Patricia, Martha, and Gladys Thielke.

A memorial service will be planned in the late spring or early summer in Salamanca, NY.  The family suggests that instead of flowers, donations be made to Hudson Valley Hospice, 274 Violet Ave., Poughkeepsie, NY 12601, the Salamanca Public Library, 155 Wildwood Ave., Salamanca, NY 14779, or to any animal rescue group.

To plant a beautiful memorial tree in memory of Mollie Birmingham, please visit our Tree Store

A Memorial Tree was planted for Mollie
We are deeply sorry for your loss ~ the staff at Timothy P. Doyle Funeral Home
Join in honoring their life - plant a memorial tree
Online Memory & Photo Sharing Event
Online Event
About this Event

Look inside to read what others have shared
Family and friends are coming together online to create a special keepsake. Every memory left on the online obituary will be automatically included in this book.
View Tribute Book
Services for Mollie Birmingham
There are no events scheduled. You can still show your support by planting a tree in memory of Mollie Birmingham.
Plant a tree in memory of Mollie